Ukraine is not a democracy ⋆ Politicrossing 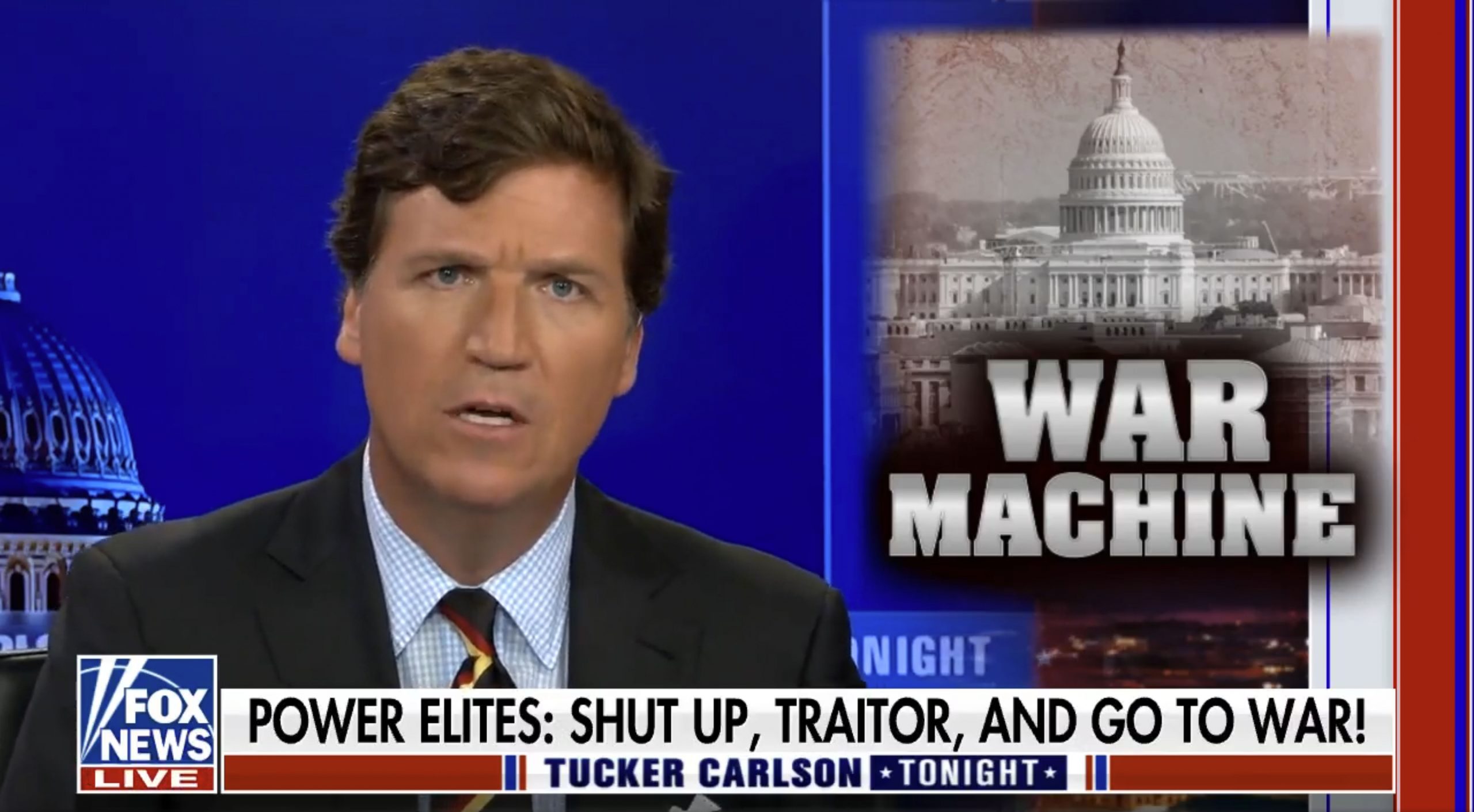 Ukraine is not a democracy

Tucker again expounds on who gets to make the sacrifices necessary to “stand for our values” and defend the non-democracy of Ukraine while these “values” and “sacrifices” continue to go undefined by those currently in power. Highlights include:

“They’ve been talking a lot about foreign policy for months. The White House has told us that if we’re ‘real Americans,’ if we love this country and aren’t traitors, then we will wholeheartedly support jumping with both feet into a highly complicated conflict in an obscure part of Eastern Europe where we have no national interest. Why? Because Ukraine’s borders are sacred, unlike our own, and if we’re good people, we’ll recognize that and not ask any questions.”

“So, that’s been their argument, that you may notice is not actually an argument.”

“You’ll note that not a single Republican leader has stood up to point out how insane all of this is and how completely divorced it is from anything that American voters actually care about.”

“Just the opposite. If you listen to Mitch McConnell, the leader of the Republicans in the Senate, you would think that what the average, say, welder back in his home state of Kentucky really wants, more than a pay raise or an affordable vacation, or decent schools for his children, what he really wants is an end to Russian aggression against the brave people of Eastern Ukraine.”

“Oil tonight approaching $100/barrel. That’s not a small thing, and it doesn’t just apply to you if you drive a car. If you purchase any physical object, it’s almost certain that object had to be driven to you by someone who burns gasoline. So, the price of everything is about to rise, and in a country that just beneath the surface is a lot poorer than it looks, that’s not a small thing.”

“In fact, it’s going to be a tragedy for a lot of people. So, if you care about the people you governed, that would not be something you’d blow off with a flip of the hand as ‘the cost of our values.’ You’d care. What you certainly wouldn’t do, if you want to preserve domestic stability, is make it very very obvious that you don’t care at all.”

“It’s about democracy. Now, we’ve told you night after night, not because we’re anti-Ukraine or Pro-Russia, we’re agnostic on both, don’t live in either country, don’t plan to, don’t care to. It’s just a stubborn insistence on defining words accurately because they matter in this country. If you subvert the meaning of a word as fundamental as democracy, maybe you can tamper with the way we live here in the United States.”

“So, Ukraine, to be technical, is not a democracy. Democracies don’t arrest political opponents, and they don’t shut down opposition media, both of which Ukraine has done. And, by the way, Ukraine is a pure client state of the United States state department.”

Dems: We Must All Hate Putin